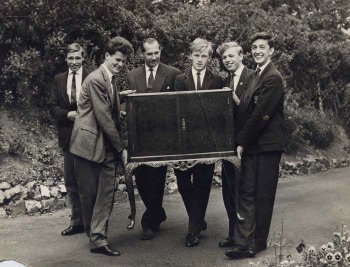 Pictured at his retirement from Greenmore

Many of us had the privilege of being taught our football skills by this genuine and true gentleman and knowing him after school in a social situation he was always modest about his achievements for Birmingham City and England, he was admired and loved as a hero by the boys and girls of Greenmore.

He lived in Shirley and in the mid 1960s before I moved away to Shropshire I would see him around and occasionally speak to him in “The Plume” he was always polite and never loud or boastful and just went about his business in a quiet and confident way.

He was one of the main reasons I have been a follower of Birmingham City for the last 55 years.

This obituary is taken from a variety of sources including Wikipedia and it has been modified where necessary.


Gilbert Harold “Gil” Merrick (26 January 1922 – 3 February 2010), was an English footballer and football manager. Considered one of the best goalkeepers in the UK during the mid-1950s, Merrick was one in a long line of great Birmingham City keepers which included the likes of Johnny Schofield and Harry Hibbs. Merrick spent his entire career at Birmingham City, playing more than 700 times between 1939 and 1960. He made 170 appearances during the Second World War and 485 in the Football League following the end of the war. He won 23 caps for the England national football team, and played in the 1954 World Cup.

Birmingham City renamed the Railway Stand at their St Andrew’s stadium the Gil Merrick Stand for the start of the 2009–10 season. Merrick’s death was announced on 4 February 2010.

Merrick was born in Sparkhill, Birmingham. He signed professional terms with Birmingham in August 1939, and would remain with the team until his retirement in 1960, and would also manage the club from 1960 to 1964. At first, Merrick was third choice keeper behind boyhood hero Harry Hibbs and Jack Wheeler, and this meant that Merrick would have to wait until 20 May 1940 to make his debut in the Birmingham first team, but the club was only playing in the Midland Regional League due to the Second World War. With the retirement of Hibbs, Merrick gained the chance to play more competitive football, and by the end of the second world war had amassed 170 appearances for the Blues,[2] including a FA Cup Semi-Final against Derby County, which Derby won 4–0 after a replay.

When the football league re-started in 1946, Merrick found himself playing regularly for the recently renamed Birmingham City. In 1948, Merrick helped guide Birmingham City to the Division Two title, only missing six games along the way. He played regularly for the Blues up until the end of the 1954–55 season when another Blues prodigy, Johnny Schofield replaced him in goal due to injury. During this time, Merrick achieved an amazing 126 league games in a row, from 15 April 1949 to 5 April 1952. He also played in every FA Cup game during this time, another nine games, including an FA Cup semi-final appearance against Blackpool, which the Blues lost 2–1.

By the 1955–56 season, Merrick had once again firmly established himself in the Birmingham City goal, as the Blues produced their best ever season, finishing sixth in Division One, and reaching the FA Cup Final, where they lost to Manchester City. Merrick was also the keeper when Birmingham reached the FA Cup semi-final the following year, only to be knocked out by Manchester United.

Merrick also played in the 1956–58 Inter-Cities Fairs Cup, where Birmingham reached the semi-final, and were knocked out by Barcelona 2–1 after a replay at the St. Jakob Stadium. He also played some part in the 1958–60 tournament, but had lost his place in the Birmingham team to Schofield when Birmingham lost to Barcelona in the final.

After only playing one game in the 1959–60 season, Merrick retired to become manager of the team he had served so loyally for more than 20 years.

Merrick was capped 23 times by England. He made his debut against Ireland on 14 November 1951 at Wembley in the 1952 British Home Championship. He was first-choice goalkeeper for England in the 1954 World Cup, his last international appearance coming against Uruguay on 26 June 1954, as England were eliminated at the quarter-final stage.[3][4] He is perhaps best known for being the last line of defence against the Hungary side of Ferenc Puskás and Nándor Hidegkuti, the “Magnificent Magyars” who beat England 6–3 at Wembley in 1953 and 7–1 at the Nepstadion in 1954.[2]

The following is a complete list of Merrick’s England appearances.[3]

After his retirement, Merrick took over from Pat Beasley at the helm of Birmingham City in May 1960. Merrick’s first competitive game in charge was a 2-2 draw away at Bolton Wanderers on the 20 August 1960, and his first home game against Sheffield Wednesday where his side drew 1-1. His side would go on to finish 19th in Division One. The Blues had another good run in the Inter-Cities Fairs Cup, reaching the final where the lost to Roma. The 1960-61 tournament did produce a win for Birmingham at the San Siro against Internazionale in the Semi-Final, and were the only English team to achieve this for around 40 years.

Although Merrick spent well in the transfer market, bringing in such players as James Harris and Welshman Ken Leek, Blues failed to make much impact on Division One, and finished 17th in the 1961-62 season (although Harris had actually been brought the year before). Blues once again entered the Inter-Cities Fairs Cup, but disappointingly went out in the 2nd Round to Espanyol

By far the best achievement in Merrick’s rein at the club came in the 1962-63 season, when he successfully lead the Blues to the League Cup title, beating Aston Villa in the final,[2] thanks to goals from Ken Leek (2) and James Bloomfield. Birmingham finished a disappointing 20th in Division One.

Merrick’s last season in charge in Birmingham City was another disappointing season, where the Blues once again failed to make much impact in Division One, and finished 20th again. This was the last time he would manage in the league, as he handed over to new manager Joe Mallett.

Merrick would have two more spells in management, with Bromsgrove Rovers and Atherstone Town.

Team From To Record