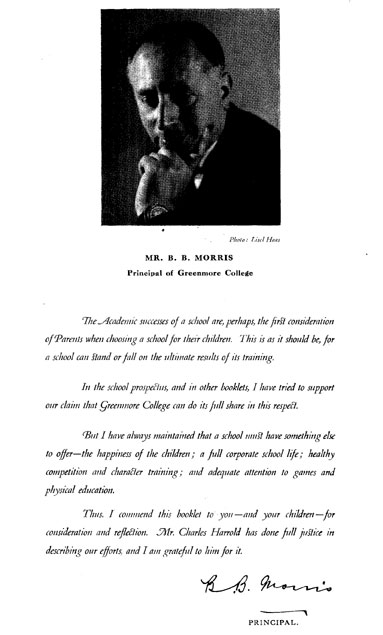 This information was obtained from ‘Chapter XX111 of My Contemporaries’

Barnett Bernard Morris,was born in 1900:and was the founder and principal of Greenmore College:In addition to his academic and business interests was a member of the Council of the Independent Schools Association, he was also President of the Young Israel Society:secretary Birmingham Social and Dramatic Club.

He also founded the original Old Greenmorians and of course was president of the schools Parent Teacher association but he was also a fellow of the Corporation of Certified Secretaries and an associate of the Faculty of Teachers in Commerce.

He also found time to join the Special Constabulary, 1940,attached to R Division(Central)

In addition to normal tours of duty he undertook with the approval of the Chief Constable the training of approximately ninety constables and thirty members of the Womens Auxiliary Police in shorthand and typewriting, entirely voluntarily. He achieved a long service medal with bar.

Bernard Morris had his first job at 14 1/2 in a solicitors office at five shillings a week.At 16 ,he was a pupil teacher on the staff of Lawrence’s College,taking pupils older than himself. There followed a post as secretary and then at twenty he decided to start his own school.

As a result of his first advertisement in the Birmingham Mail, one pupil turned up,followed by three or four others at monthly intervals.He purchased a typewriter,put out a slogan: ‘The school that saves time’ and commenced a series of evening classes,concentrating on rapid commercial courses.

He soon found that commercial training needed an educational foundation, and introduced a High School section , taking pupils from eight years of age.

By 1939 he had established himself as a teacher, and had 120 pupils. With the declaration of war ,the schoolwas closed for 14 fdays. On reopening only 32 pupils turned up with a staff of 6. It looked impossible to keep it going .However the staff cooperated and it went on.

An enemy bomb necessitated the evacuation of the college to Edgbaston, and Morris was given considerable help by the Principal of Edgbaston Girls` College,who leased him some of her classrooms. During the war he trained over 700 girls from the A.T.S. Later he obtained premises at 215 Bristol Road and by 1944 the school had grown to 250 pupils.

Meantime, 204 Bristol Road, had been taken over by the authorities as a wardens post and air raid shelter.When they gave it up Morris bought it. A little later Farnborough House School in Pershore Road with 40 pupils came on the market. Having acquired that, he was able to accept pupils from 4 years of age.Two other schools followed in quick succession (which ones please let me know-Nigel)By 1948 he had built up a college of 500 pupils.

Josephene Margaret Simmonds remembers going to the original school which started, above Henrysdepartmentsâ†’reâˆˆBirmingham,justbeforethewar.

The building was bombed and the school closed, and the pupils were transferred to Edgbaston Girls High School on Bristol Road. During this time air raids continued and when the siren sounded the pupils went across Bristol Road into a cellar. 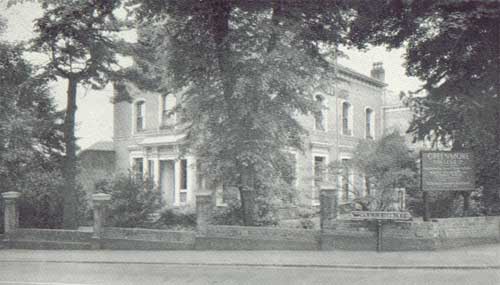 After the Butler Education Act,provisional recognition was accorded him, and the College was one of the List 70 schools in England recognised as ‘efficient schools’ by the Minister of Education, with a scope of work including Nursery, Kindergarten and prepararatory schools and preparation for Grammer schools entrance, General Certificate in Education, and Secretarial Training.

In 1952 Rathvilly School, Northfield and the Burlington Secretarial College New Street were added and at the time of writing Greenmore College was the largest independent school in the country,with an enrolment of over 800 scholars.

Every year the Birmingham Town Hall was rented for the annual prize distribution and usually the Lord Mayor, Deputy, or some other prominent citizen distributes the certificates of which at the time of writing over 7,000 had been gained by pupils.

Nigel Hinton writes ‘ I still have my program for the 1961 33rd Annual Prize Distribution on 7th March.

I have acopy of the 1950 program if anyone needs information.

The chapter in the book concluded with a series of questions that the writer addressed to Mr Morris and his replies I have reproduced these as written as these are the closest we are going to get to an interview with Mr Morris NJH.

‘ What made you ‘I said in the face of considerable competition go in for an organisation of this kind?’

‘I felt’ he replied, ‘there was an opening for this training in a city like Birmingham, and that a private enterprise organisation on the lines I have been able to create would be successful.’

The proof that it has been is the size of the school, and the number of certificates awarded to its scholars.

‘So’, I said ‘ when asked your most useful contribution to your generation , what is your reply?’

‘ Teaching some thousands of scholars,things they have to know, in a city like Birmingham, to make a success of their jobs. We have introduced certain specialised commercial subjects into the General certificate course with very satisfactory results.’

‘Does the teacher prefer the public to the private school ?’

‘Usually the other way about. They must have the same qualifications and are paid the Burnham scale, but many teachers prefer the smaller classes and the greater independence of the private school. Incidentally, there is not as much form filling’

Bernard Morris`s out look was certainly different from numerous educationalists.Many industrialists think it is more useful.

The Morris method may lack the frills and fancy trappings beloved by some amiable therists, but it is a sound basis on which to build higher education for those who need it.

In introducing a breath of reality into our educational system, Bernard Morris has performed a useful public service.